Initially we assessed the exterior of the property, and found that there were areas of deteriorated pointing on the front elevation. This will increase the risk of moisture penetration into the elevation. The ground ﬂoor section of the front elevation has been painted with numerous coats of non breathable paint. This will trap moisture within the walls, and in turn increase the risk of internal damp issues.

To the rear we found that again there were areas of deteriorated pointing, and in some areas the pointing was falling out. There were also areas of pointing that had been repaired using a cement based mortar. Cement is non breathable, and will trap moisture within the wall. The rear has received a small single storey extension. This along with the side facing elevation has been rendered with a non breathable cement based render. The rear facing wall has also been painted with numerous coats of non breathable paint.

The ground level was found to be high to the rear, and was nearly at the internal ﬂoor level, as opposed to being the recommended 150mm below. This will increase the risk of moisture penetration into the wall base, and in turn the ﬂoor structure. 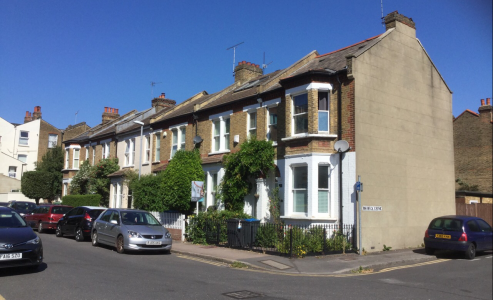