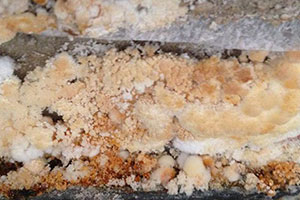 Potential allergens such as pollen, mould spores and dust mite are commonplace in the daily environment and are found both inside and outside the home.

Although most individuals are exposed to these allergens on a regular basis with little impact on health, regular exposure to some allergens, particularly indoor moulds can cause severe health problems, especially when present in large quantities.

How do household moulds cause health problems?

What health problems are related to household moulds?

Evidence to support a relationship between the presence of household mould or damp and an increase in the incidence of health problems such as fungal infections, respiratory illness, asthma and allergies is heavily documented.

Individuals with impaired immune functions such as the elderly, young children, cancer and HIV patients and patients who have received transplant organs are particularly susceptible to health problems caused by mould. As more and more of these patients are treated and rehabilitated in the home, it is increasingly important to ensure that secondary illnesses, such as those caused by mould exposure are prevented in these individuals.

Scientific studies have found that more than 80 species of fungi have been associated with respiratory tract disorders, where breathing in mould can cause bronchitis, asthma, sinusitis and recurrent respiratory infections.

Children, especially pre-school children exposed to mould have a significant increase in the risk of persistent cough and show significantly more episodes of common cold than children who are not exposed to mould.9 In addition, children living in damp homes display a 20-25% increase in upper respiratory tract symptoms such as coughing, wheezing and breathing difficulties.

Studies have shown that adults living in damp homes or homes with high levels of mould report an increased incidence of respiratory infections and symptoms such as rhinitis, sore throat, cough and common cold.

A strong correlation between high levels of mould in the home and the incidence of a Lower Respiratory Tract Infection (LRTI) diagnosis e.g. pneumonia, bronchitis, croup or bronchiolitis in the first year of a child’s life has been reported. Airborne Penicillium was shown to be significantly associated with lower respiratory infection with children aged 12 months and under.

Scientific evidence has shown that asthma is more prevalent among adults living in damp homes and that asthma is three times more common in adults with mould allergy.

Fungal spores are generally recognised as important causes of respiratory allergies in both the lower and upper respiratory tracts, causing symptoms such as sneezing, runny nose, red eyes and skin rash. The household moulds Penicillium and Aspergillus are more closely associated with allergic symptoms and allergic sensation than the common outdoor moulds.

A study has established a link between incidence of allergies in atopic individuals and the presence of Aspergillus fumigatus, a fungus commonly found in the soil of potted plants in the home.

Fungal infections such as Aspergillosis and Candidosis are caused by opportunistic fungi which enter the body via open wounds, or grow on the body surface, e.g. feet, skin, hair and nails. Fungal infections are highly contagious and are easily spread by direct contact. Individuals with weakened immune systems are particularly susceptible to fungal infections, where the infection can reach internal organs and become potentially life threatening.

Several studies have shown that the removal of visible mould or removal of people from exposure to mould significantly reduces or ceases the symptoms of these health problems. As such, mould must be effectively eradicated from the home, as well as prevented from entering the home in order to prevent and reduce illness.

This information was gained from the Hygiene Council website.